Recently we have noticed some Win32/Rovnix samples (detected as TrojanDropper:Win32/Rovnix.K) causing the BSOD on Windows 7 machines. We spent some time investigating this situation and discovered an interesting story behind the BSOD.

We first saw TrojanDropper:Win32/Rovnix.K in October 2013. During a normal Windows Boot the malware will cause the BSOD. 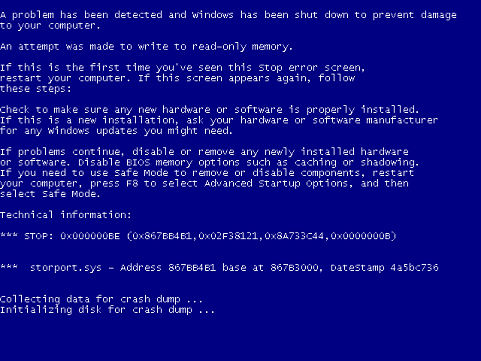 ATTEMPTED_WRITE_TO_READONLY_MEMORY (be)
An attempt was made to write to read only memory.  The guilty driver is on the
stack trace (and is typically the current instruction pointer).
When possible, the guilty driver's name (Unicode string) is printed on
the bugcheck screen and saved in KiBugCheckDriver.
Arguments:
Arg1: 867bf4b1, Virtual address for the attempted write.
Arg2: 02f72121, PTE contents.
Arg3: 8a733c44, (reserved)
Arg4: 0000000b, (reserved)

As shown above, the BSOD is caused by writing to a read-only memory address (0x867bf4b1).

We can then use the  .trap command to get further information.

According to the above information, the BSOD is raised when Rovnix is trying to write to address 0x867bf4b1 (ecx).

Let’s have a look at that address:

We know Rovnix is trying to write a byte 0xcc at address storport!RaDriverScsiIrp.
However, it didn’t make the address writable, so it’s causing a write to read-only memory BSOD.

The trick behind this BSOD

Why is Rovnix trying to put a 0xcc byte at a driver dispatch function? Isn’t that going to cause an exception? We recall having seen this trick before (used by Win32/Alureon) – it’s a tricky hooking mechanism. In short, it works like this:

Is that the end of the story? No, not yet.

Did the malware author test the sample before releasing it? Probably yes, but perhaps only on Windows XP. We tried this sample on a Windows XP machine, and it doesn’t crash – the KiDebugRoutine trick works as expected.  This means that on Windows XP, the memory address should be writable. However, the section characteristics are read-only for both cases. So why is the address writable on Windows XP but not Windows 7?

That’s the whole story of this BSOD – “Rovnix’s fault- so core dumped”.

Our TrojanDropper:Win32/Rovnix.K description has full remediation steps to fix this issue.

As always, the best protection from this and other threats is to run up-to-date real-time security software such as Microsoft Security Essentials and the Enhanced Mitigation Experience Toolkit.